The distinction between probability and likelihood is fundamentally important:

The set of hypotheses to which we attach likelihoods is limited by our capacity to dream them up.
In practice, we can rarely be confident that we have imagined all the possible hypotheses.

Our concern is to estimate the extent to which the experimental results affect the relative likelihood of the hypotheses we and others currently entertain.

Because we generally do not entertain the full set of alternative hypotheses and because some are nested within others, the likelihoods that we attach to our hypotheses do not have any meaning in and of themselves; only the relative likelihoods — that is, the ratios of two likelihoods — have meaning.

The difference between probability and likelihood becomes clear when one uses the probability distribution function in general-purpose programming languages.

In the present case, the function we want is the binomial distribution function.

It is called BINOM.DIST in the most common spreadsheet software and binopdf in the language I use.
It has three input arguments: 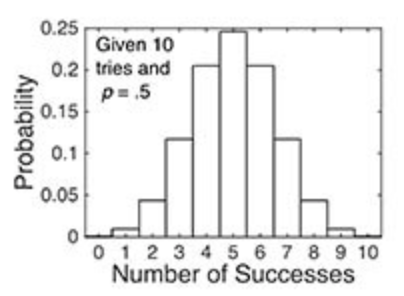 The binomial probability distribution function, given 10 tries at p = .5. 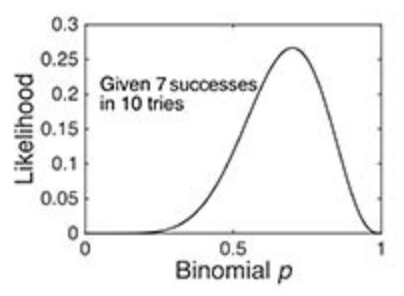 The binomial likelihood function, given 7 successes in 10 tries.

Both panels were computed using the binopdf function.