One may wonder why deep learning has only recently become recognized as a crucial technology though the first experiments with artificial neural networks were conducted in the 1950s.

Deep learning has been successfully used in commercial applications since the 1990s, but was often regarded as being more of an art than a technology and something that only an expert could use, until recently.

It is true that some skill is required to get good performance from a deep learning algorithm.

The most important new development is that today we can provide these algorithms with the resources they need to succeed.

The figure below shows how the size of benchmark datasets has increased remarkably over time. 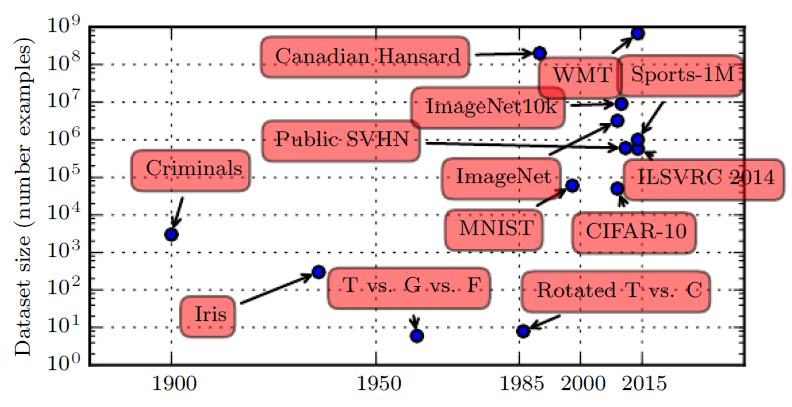 This trend is driven by the increasing digitization of society.

As our computers are increasingly networked together, it becomes easier to centralize these records and curate them into a dataset appropriate for machine learning applications.

The age of “Big Data” has made machine learning much easier because the key burden of statistical estimation—generalizing well to new data after observing only a small amount of data— has been considerably lightened.

As of 2016, a rough rule of thumb is that a supervised deep learning algorithm:

Working successfully with datasets smaller than this is an important research area, focusing in particular on how we can take advantage of large quantities of unlabeled examples, with unsupervised or semi-supervised learning.